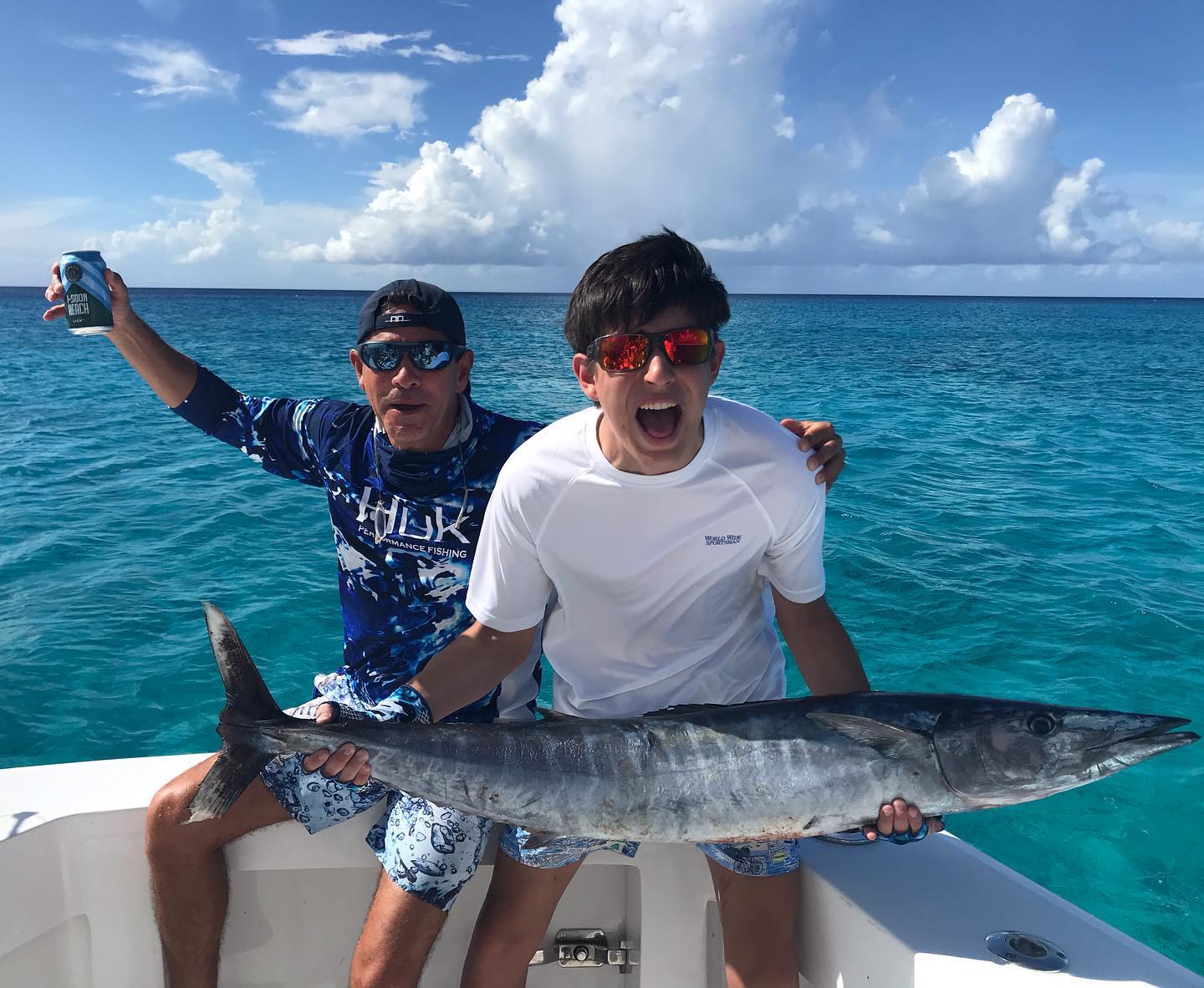 Fishing in Turks and Caicos offers exciting possibilities for those looking for “the big Catch.”
The tropical waters around the islands are home to a variety of the world’s most sought after fish. From the legendary blue marlin to the beautiful- and very edible- dorado/ mahi-mahi as well as smaller reef fish, such as groupers and snappers, the sea around the Turks and Caicos teems with life.
Captain Roy, from local sports fishing charter company Catchin’ Caicos highlights some of the best fish to catch while on your next Turks and Caicos sports fishing adventure.

The extremely ugly but prized black grouper is a popular game fish for reef fishermen in the Caribbean. Known as a tough opponent on the line, black grouper must be reeled in quickly before they retreat to cover on reefs, which can lead to tangled or snapped lines. A variety of natural and artificial baits have been recorded for catching grouper, which make a delicious meal.
The black grouper is a predatory fish, which can be found throughout the western Atlantic Ocean. The heaviest recorded size for a landed grouper is 220 pounds, though it is uncommon for them to grow to this size.
Grouper can be caught in the Caribbean all year round, but November through April represent the best time of year to fish for them.

One of the most elusive and prized fish in the sea, it is important to note from the outset that most deep sea sports fishermen do not kill marlin – including the team at Catchin’ Caicos. Although there is a commercial market for blue marlin, it is catch and release with this increasingly rare fish. Sports fishermen have actually been on the front line in marlin conservation, working to establish an electronically tagged marlin population, in order for conservationists to figure out the best ways to protect the species.
The marlin is an extremely powerful, extremely aggressive fish – they are sure to tire you out, rather than the other way round. Renowned as one of the hardest fish in the world to land, marlin will run long and deep on the line, leap high in the air, and fight relentlessly against capture.
A carnivorous fish, the best method for catching marlin is trolling large baits such as dolphin, mullet, mackerel and squid, though artificial lures and strip baits have been known to have success. In the wild, marlin use their long sword to pierce or stun prey, before returning to feast. Expect your bait to be treated the same way, which can result in sudden wrenching movements. The marlin is an extremely large fish, with the largest recorded specimen weighing in at 1,402 pounds. Marlin can live in the wild for up to 27 years.
The best time of the year to fish for blue marlin off the Turks and Caicos, is July through September, though they are present in the Caribbean waters from May through October.

The mahi-mahi, or dorado, is perhaps the most prized sports fish in the world. The golden scales and jet black dorsal fin are truly beautiful, and the fish is top of the list for many big game fishermen. In death the fish quickly loses this stunning color, so make sure any photos are taken soon after landing a dorado, or you’ll miss your opportunity.
The dorado is one of the fastest fish in the sea and can reach a top speed of more than 56 miles per hour. Weighing in at around 28 pounds (though occasionally they can reach 40 pounds,) they are nowhere near the weight and power of a marlin, making them much more attainable for less experienced sports fishermen. The dorado is also relatively abundant, found in good numbers throughout its range. The fish grow quickly, as they have a lifespan of just five years, meaning it is rare to catch anything less than a full grown dorado.
Fishing charters often look for seabirds and floating debris when hunting dorado, as the fish often swim near such debris in search of food. A net full of sardines, tossed into the water, can sometimes be used to lure a whole frenzy of dorado, which can then easily be caught on a line. Reeling the fish in isn’t easy – it will bolt in all directions, trying to escape. November through March represent the best months of the year when fishing for the dorado.

Several species of snapper can be found around the reefs of the Turks and Caicos. These fish are relatively small and easy to catch when compared to something like a wahoo, much better suited to someone who hasn’t fished much before.
The most striking snapper species is the red snapper, a fish of increasing rarity. The iconic red coloring of the snapper make it extremely popular with sports fishermen, who hunt it throughout its range in the western Atlantic, Caribbean and Gulf of Mexico. It is an important commercial fish but is also popular with big game fishermen.
Red snappers are no easy catch. They tend to nibble at bait rather than take it whole, so a gentle touch is needed to bring them in. Bottom fishing over reefs and wrecks is the preferred method of catching red snappers, with squid being a preferred bait. Catchin’ Caicos’ 60 foot Hatteras is the perfect fishing yacht to catch bottom fish with their top of the line equipment including the Krystal Deep Drop Reels. Red snapper can vary considerably in weight. The average size of a fish tends to be around 15 pounds, but the largest recorded fish was closer to 50 pounds! This may be down to the snapper’s long age, with an undisturbed fish sometimes living (and growing) for 100 years.
Other snapper species one can catch in the Turks and Caicos Islands include the pretty and extremely common yellowtail snapper, as well as the mutton snapper. This species is most abundant in the Caribbean, where it weighs in between 5 and 30 pounds.
Snappers can be caught all year round in the Turks and Caicos, with November through April representing the best opportunities.

The wahoo is beautifully striped and found throughout the tropics and the subtropics. It is a living torpedo, swimming at lightning speeds of nearly 80 kilometers per hour. They grow rapidly too, and it is not uncommon for landed wahoo’s to weigh in at around 100 pounds – though the record is significantly bigger, at 138 pounds! A prize for sports fisherman due to its speed and high-quality flesh, the team at Catchin’ Caicos is pleased to encounter the wahoo on an almost daily basis.
The wahoo is a carnivorous fish, feeding on smaller creatures that it catches around wrecks and reefs, though it spends a lot of time in deeper waters too. When trying to land a wahoo, don’t be surprised when the fish tries to make a run for it, it may reel off several hundred yards of line in just a few seconds as it attempts to bolt. This energy doesn’t drain quickly, and you’ll be in for quite a battle when trying to land the fish. It may jump out of the water, and even when you have it on the boat, it will wriggle and shake violently in an attempt to free itself.
There are no foolproof methods for catching a wahoo. Rigged baits, strip baits, artificial lures, live bait and kite fishing can all be used to catch a wahoo. It’s worth the effort, as the sweet flesh makes delicious eating!
The wahoo can be caught most of the year off the Turks and Caicos, with the exception of July through August. Alternatively, November through March are the months where the fish is at its most abundant.

The yellow fin tuna, commonly marked as Ahi is a fish of varying size, often weighing between 20 – 40 lbs but once in a while coming it at over 100 lbs, and is found abundantly in the healthy waters of the Caribbean Sea which surrounds the Turks and Caicos Islands. This prized fish can be found in deep waters, but are known to venture closer to the shores to feed on bait fish when the proper conditions present themselves.
A much-desired fish, known for its artisan use in sashimi dishes and beyond, the yellow fin tuna has been sought after by sports fisherman for decades. Yellowfin baits are often squid or anchovy, known for attracting large schools to the pole-and-line setups onboard the Catchin’ Caicos fleet.
Catching yellow fin tuna is one of the most exciting experiences for any fisherman. Yellow fin can put on quite a show busting through the ocean water in large groups displaying their beautiful blue, yellow, and green colors accented by dorsal and ventral fins which appear to stream away from their bodies. A true site to behold, it’s not uncommon to have multiple simultaneous strikes in this scenario leading to an exciting and intense coordination in order to land multiple fish at once. These fish put up an incredible fight often diving deep, and the Catchin’ Caicos crew is always prepared with sharp knives and soy sauce. Upon landing this incredible fish the crew know how to properly bleed the fish, and fillet strips of the fresh catch for their clients’ instant enjoyment leading to one of the finest and freshest eating delicacies anyone could experience while fishing in the Caribbean Sea.

About our guest author: Captain Roy, from local sports fishing charter company Catchin’ Caicos located at Turtle Cove in Providenciales, TCI hosts guests from all over the world for unforgettable fishing in Turks and Caicos. Catchin Caicos are a sustainable fishing business with best environmental practices such as catch and release for protected species like marlin. 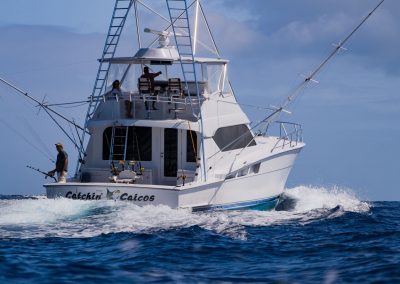 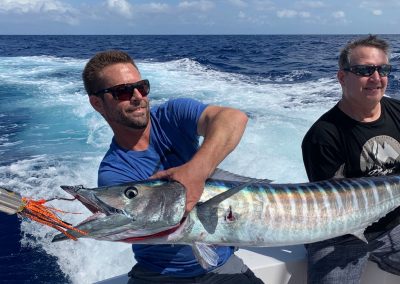 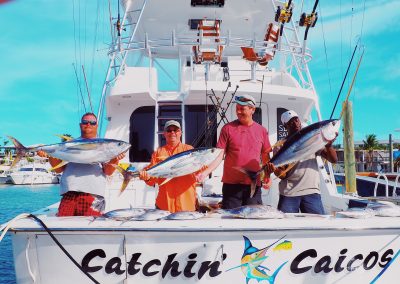 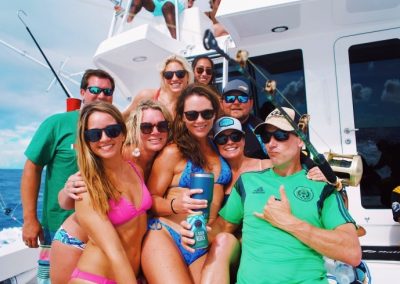 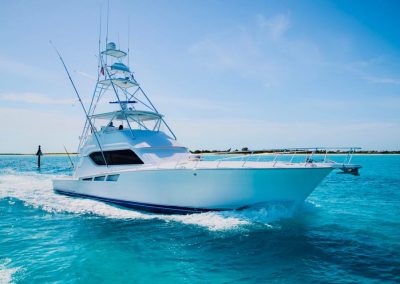 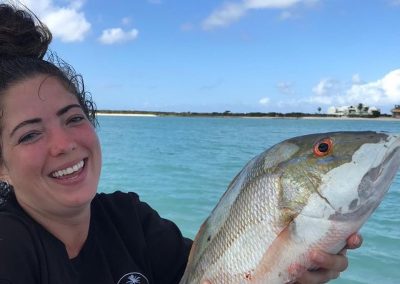 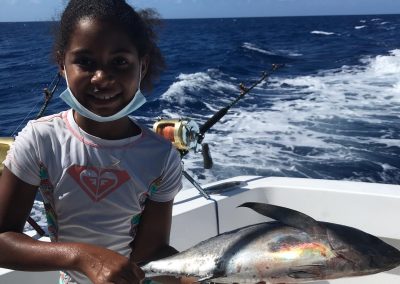 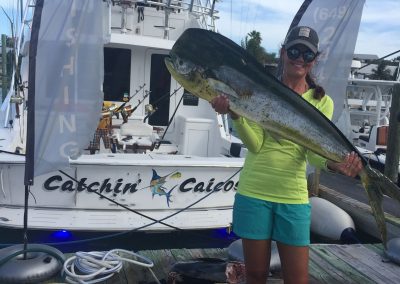 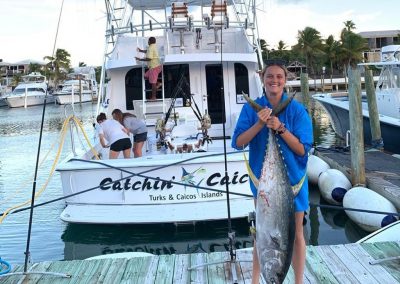 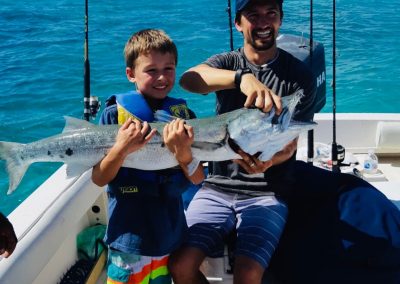 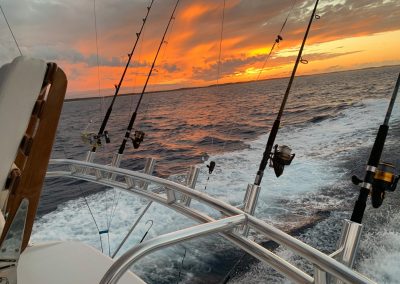